Lola examines why she is always trying to rescue people while all around her the Wastelands Trading Company is being attacked by both the Carnies and Conrad’s group. Rolling battles occur across the Trading Company and as Lola  tries to help those she regards as friends she is fighting an uphill battle. Will everyone make it out alive in this epic conclusion to volume one of Lola xoxo.?

Volume one comes to a huge climax in this awesome series with all the major players coming together one final showdown. It almost has the feel of one of those great western shootouts right at the climax of the movie.

The artwork as I have mentioned in previous reviews is excellent and adds so much to the setting and depth of this series.

The setting and characters in the series have been so absorbing you can’t help but get brought into the story in a big way. This is series worth reading. 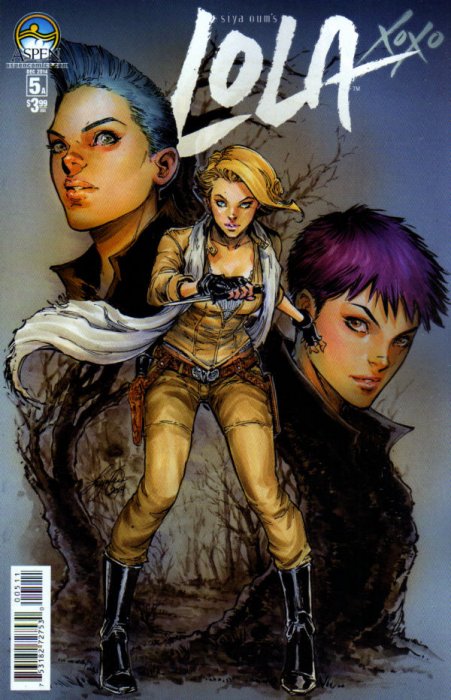 After making a discovery that might aid her in finding her parents Lola reunited with her traveling companions and they eventually make camp.

Elsewhere The Carnies leave their camp to rescue Kami and to make a stand against the Wastelands Trading Company.

Lola and Kami continue to bond. However at night their camp is once again attacked and Lola again proves her fighting skills and saves Kami. Lola inform Kami that she wants them both to get away from Edgar’s people.

The next day they return to the trading company but all does not go well for Lola and Kami, which sets things up for our final issue in volume one…

Volume 5 continues to set the stage as this first volume draws to a close.. what will be the fates of Lola & Kami? Will Lola be reunited with Conrad? Will the Carnies succeed? 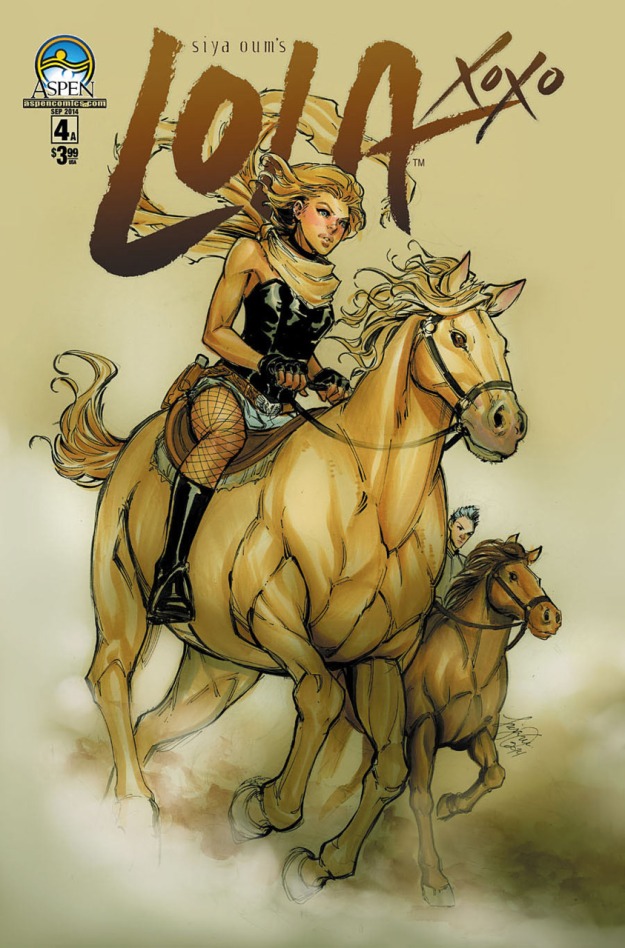 The end of issue three saw Lola under attack in the Wastelands while her party were camped for the night, she is helped by her traveling companion but they were unable to save the life of the person they were trying to help.

Elsewhere Conrad is still trying to get a plan into motion to get Lola away from the Wastelands Trading Company and there is decent in the ranks of The Carnies.

Once again Lola comes to the aid of Kami The Carnie in her care this has happened several times now.

As they continue Lola finds out some information that may be a game changer for not only her world but the place at large.

The second one is several times in the series Lola has come to the aid of Kami the captured Carnie. While Lola appears to be a nice person just trying to do what is right all the time I can’t help think that there is the beginnings of a friendship here waiting to develop.

As a whole the series continues to improve and impress with the final two issues in volume one still to go I wonder where it’s taking us next. 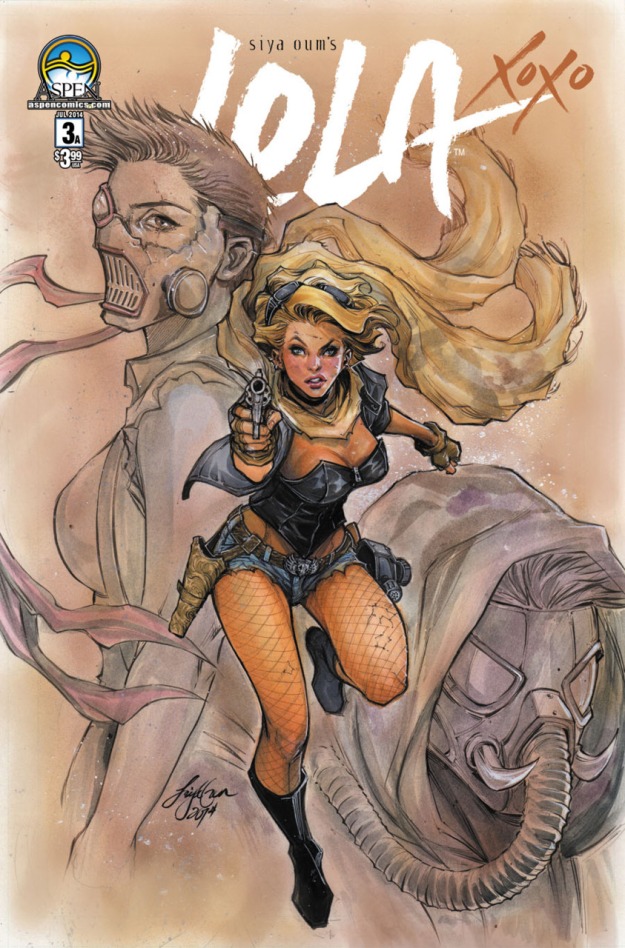 Issue two closed with The Carnies attacking a settlement to get some supplies, Lola encounters one of them who is captured after Lola tries to help her escape.

Lola continues her training with The Wasteland Trading Company when Huntington arrives at the Trading Company to reclaim Kami and use her to get to The Carnies and their leader Monarch.

Conrad returns to his hideout and laments the loss of Lola to the Trading Company. He then heads off to gather supplies to try to put together a negotiation offering to get Lola back.

Lola writes her parents another letter and stores it before the goes out. She is handed a gift from her new boss and told to use it wisely.

After riding for some time Lola and her companion stop for the night and make camp. Lola and Kami have a nice moment together sitting by the fire. Kami falls asleep, a disturbance in the darkness gets Lola’s attention and she goes off to help someone. A fight ensures and Lola realises the dangers she is facing.

Towards the end of the first issue we see Lola involved in a bar fight and being accused as being a horse thief.

In issue two we see Lola make a deal that saves her friends and hopefully work towards finding her parents and in doing this she discovers more about the wastelands. She says goodbye to Conrad and heads off with the new group.

Elsewhere in the wastelands we are introduced to a group called the Carnies who were owned by someone called Huntington and forced to fight in an arena. They get away and form a plan for their survivor in the wasteland.

While Edgar is showing Lola around his establishment someone comes in and informs him about the Carnies escaping from Huntington. Edgar puts Lola to work to help with the Carnies.

Two Carnies Monarch & Kami go to the Northeast tower to get food and weapons, they were successful in their raid. However Lola and Edgar’s man are there. Lola and Kami have a small fight, Lola wins but lets Kami go which she does not expect. However before the altercation is complete one the Carnies is captured.

Issue two continues to introduce us to the rich immersive world and brings us more characters to fill the wonderful world that has been created.

The art and story writing continue to be very strong in this issue. This series grabs you at issue one, pulls you in with issue two and makes you want to read issue three straight away. 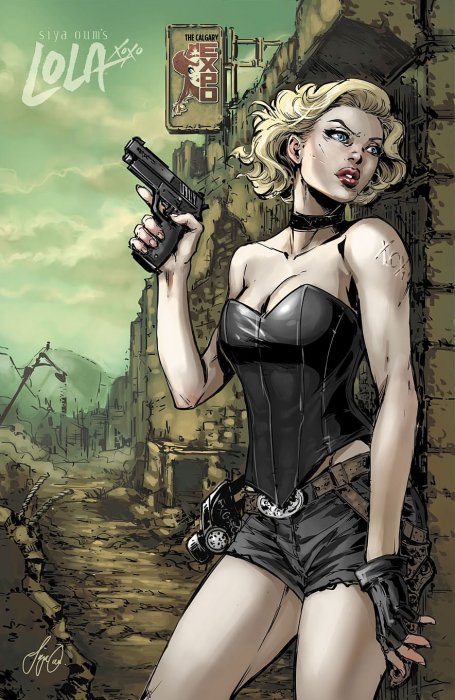 Dedicated to Michael Turner, The Spirit of Aspen

Lola xoxo is one of the latest in an impressive line of comic series with a strong lead female character. In the case of this series its Lola Jones with the story & illustrations by Siya Omu. Lettering done ny Josh Reed.

In issue one of this series Lola a young girl is travelling alone on a plane flight from Los Angeles to New York City to see her grandma with her parents expecting to see her for her birthday.

While in flight her plane is ordered to land at Dayton Airport where she is lost and out of contact with her family. While calling out for help a man by the name of Conrad comes to her aid. Then the true situation is revealed. The series then continues several years later with Lola a young woman.

This title is defiantly not for younger readers as it contains some graphic scenes, adult themes and violence.

The artwork in this series suits the setting the it is set in which adds to the overall feel of the book. The writing is easy to follow and makes a good narrative.

Lola herself is a very strong character who is very able and capable of looking after herself. I hope she finds what she is looking for in the world. She is a character that one could easily become invested in.

This is a series I will enjoy like my other main Aspen title Soulfire.

Can I Play Too?

Pirates of the Burley Griffin

A schedule bears the same relationship to reality as Astrology